Former Prison Island to Open for Tourists in April

You are here:
Mexico Boating 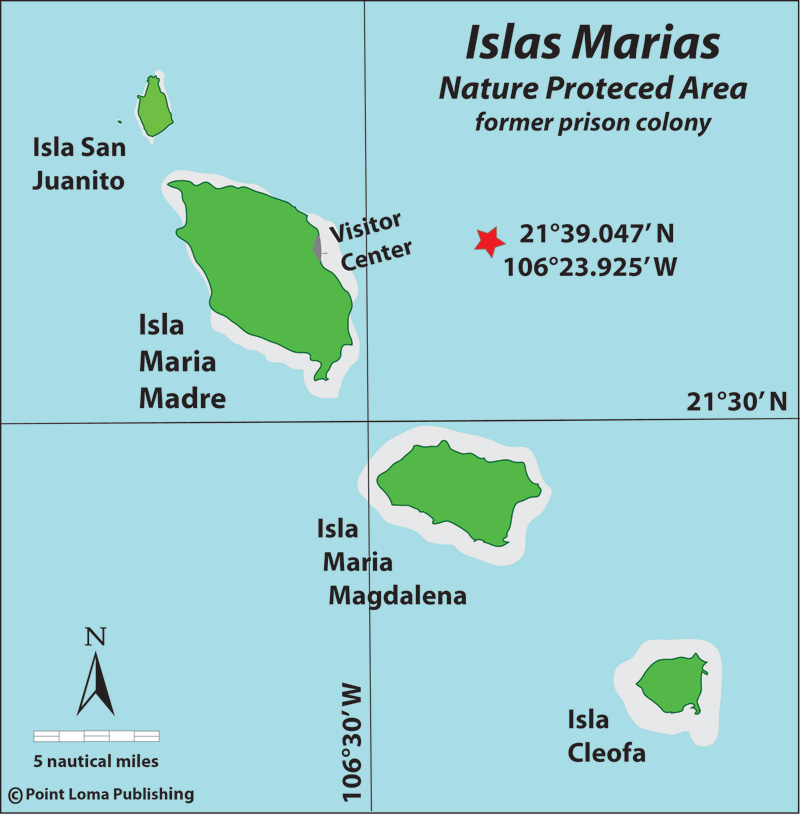 The Islas Marias had a scary past for boaters.

Recreational boaters in the past reported being shot at when they strayed too close to the Islas Marias prison colony. Or they were politely escorted outside the prison’s 20-mile No-Go perimeter by Mexican Navy patrol boats bristling with armed guards.

But in 2019 the federal government removed the last 16 prisoners and closed the 114-year old prison on Isla Maria Madre, the largest in the 4-island chain which lies about 55 n.m. off the state of Nayarit. At first the government renovated the prison buildings into a small environmental-education camp that for about a year hosted small groups of university students. The other three islands that had remained untouched for nearly a century were designated as a Natural Protected Area (ANP) “with the nature of a biosphere reserve,” and Isla Maria Madre was declared a UNESCO World Heritage Site.

Now, starting in April, 2022, Mexico’s federal tourism and environmental departments (SecTur and SEMARNAT) are planning to open only parts of Isla Maria Madre as a fledgling nature park, one step at a time.

Mother Maria Island will host no more criminals serving time, just smiling tourists arriving aboard small excursion vessels at Puerto San Balleto, an open bay on the northeast side of Isla Maria Madre where the new Visitor Center complex has been built. The park’s Environmental and Cultural Education Center will contain an outdoor sports area called “Muros de Agua – Jose Revueltas,” referring to the island’s walls of water that prevented prisoner escape. Many prisoners had lived in semi liberty, confined to the island only by shark infested waters and strong currents.

To begin this new endeavor, a limited number of day-trip tourists, called “excursionistas,” will be ferried out no more than three times a week from Puerto Vallarta, San Blas and Mazatlan, according to Jorge Chavez of the Mexico Daily News. This plan to limit the number of visitors on the island is intended to limit their impact on the natural environment. Last year, several Mexican Navy vessels were planned to ferry all registered visitors out and back, but this year private excursion boats are planned with Navy escorts. Details for purchasing tickets are not yet released.

After disembarking at the Visitor Center, tourists will be able to hike the newly groomed trails over Maria Madre’s mountainous terrain, take photos of the pristine flora and fauna, and relax in the Muros de Agua Visitor Center. But tourists will probably need to bring their own food and water, because a restaurant has not yet been built. And because the island has no overnight facilities, all tourists must embark and depart the island before sunset.

The amount of time visitors will be able to spend on the island has not yet been released, but it must be limited by the speed of whatever vessels are being planned to ferry them there and back. From Mazatlan, Isla Maria Madre lies about 93 n.m. SSW. From San Blas it’s about 72 n.m. west, and from Puerto Vallarta municipal harbor, the voyage to Isla Maria Madre is about 96 n.m. NW.

Recreational boaters who wish to enter any of Mexico’s 183 existing ANPs normally must buy an annual Conservation Passport from CONANP, costing about $80.

But details have not yet been released from CONANP or SecTur about how and when individual recreational boaters aboard their own boats can visit this brand new ANP and the Visitor Center and nature park on Isla Maria Madre, or if and when individual recreational boaters will be allowed to anchor to rest, fish or dive at other suitable locations along this gorgeous 26-mile long chain of islands.

Return here for details when available.